A story in a photograph from World War II 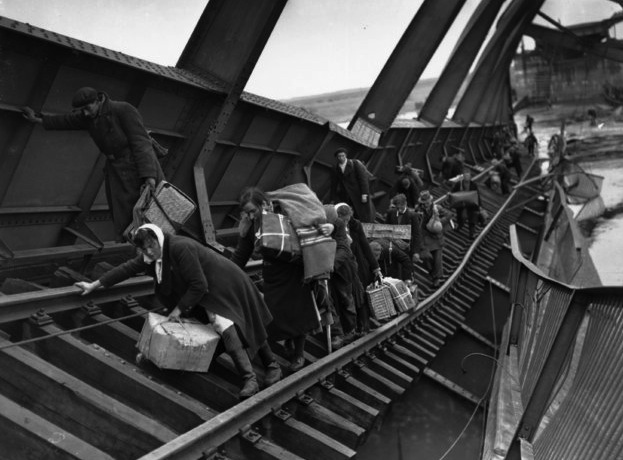 I’m working on another World War II novel, and a big part of what goes on behind the scenes is research into the time period. There are a lot of fascinating books to read, and one of the best so far has been “The Fall of Berlin” by Anthony Beevor. It’s about the whole unraveling of the Third Reich and the final days of the Second World War. In many ways, the book is less about tactics than about the myriad stories of ordinary people trying to survive disaster.

Something that really helps when doing research is to spend some time looking at photographs. One of the photos that stands out for me is this one, which shows Germans crossing the Elbe River on a ruined railroad bridge. What’s happening here is that the Germans are fleeing the oncoming Russian forces. They are desperate to reach the other side of the river, where Germany is occupied by American forces.

From what I have read, the Americans did not try to stop this flow of German refugees, but they did not try to help them, either. What can’t be seen in this photograph would be the many rowboats and rafts—basically, anything that would float—that were being used to cross the water. The Germans feared the Russians, and with good reason.

So far, there is going to be a scene where Cole and Vaccaro ignore orders to help some of these refugees.

Getting back to the photograph. The image shows 18 people making their way across the bridge at this particular moment. There aren’t any old folks or children. One slip could send you into the river far below. Falling into the gaps between the ties could mean a broken leg. The crossing must have been harrowing.

You can see that each person is intent on where each foot is going next. These people are together, but each is alone.

The other men in the photo also appear young enough to have been soldiers. It looks as if they want no part of that anymore.

The second woman has disheveled hair and is loaded down with a package and a frayed blanket.

What are they carrying? Clothes, a few possessions. The unsettling thought comes to mind about what you would take with you in these circumstances.

Just one man in the middle of the photo is looking up. He seems to be looking at the photographer, who is the person in this scene that you can’t see. I’ve been trying to figure out where he was standing. Did he edge his way out onto one of those support beams?

At this point, I’ve looked at many photographs from World War II, but this is one of the most powerful images yet. The war has left Germany in twisted wreckage, and yet people are scrambling to survive.

This entry was posted in Writers & Writing and tagged crossing elbe. Bookmark the permalink.