Takeaways from the 2016 Bay to Ocean Writers Conference 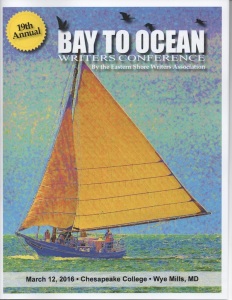 You might call this one writers and conflict. At least, that seemed to be a recurring theme of the 2016 Bay to Ocean Writers Conference, held at Chesapeake College.

But when it comes to writing, conflict is a good thing. Why else would readers keep turning pages?

Speaking of conflict, it used to be that I didn’t like writers conferences and avoided them in general because there seemed to be an air of desperation about these events. There were the actual “published” authors—and there was everyone else who was trying to figure out how to join that club. Although I’ve been a member of the “published” club since 1999, I was never comfortable with this two-class system.

In a lot of ways, the rise of self publishing has eliminated that divide and made writers conferences more collegial. Thanks to ebooks, the 25-year-old with a passion for writing mermaid romances could be a few clicks away from becoming the next big bestselling author on Amazon. The 70-something fledgling author may have an amazing memoir to share. In the old days, that story had almost zero chance of reaching an audience through a traditional publisher. Now, that memoirist can become a published author who has reached an audience. Even if it is a small audience, these readers will appreciate the unique story that she has to tell.

At your next Bay to Ocean Writers Conference, you may make small talk as you help one of these authors tilt the coffee urn to get that last cup out, or you may chat in the lunch line. You will both learn something from one another.

Not sure how to get started with that conversation? Just ask your fellow writers where they’re from, what they write, or what the best session was that they’ve been to so far.

The fact that we’re now all in this together, and that we all have knowledge and experiences to share, makes writers conferences so much more valuable.

Then there’s the human factor. The fact that I basically write full time nowadays means that writers conferences create an opportunity to get out from behind the keyboard to talk to actual people. When these actual people are writers, it’s an even better connection.

Attendees came from as far away as Timonium, Belair, Annapolis, Lewes, Salisbury, and Reston, Va. Some were accomplished authors, while others were just beginning to explore the art and craft of writing. The conference offered new paths to success for them all.

Here are a few of the highlights from the conference. Obviously, I couldn’t get to everything (and we had an ESWA board meeting in the middle of the conference) but here are some takeaways to share.

Now, getting back to conflict …

Conflict begins with a precipitating event, noted author and writing coach Barbara Esstman said in her talk, “How Not to Get Lost in the Funhouse of Your Mind.” The problem faced by the characters needs to be literally or psychologically a matter of life or death.

“What life changing, terrible thing will happen if this problem is not solved?” was the question she posed to writers. She noted that it’s not always enjoyable to put one’s characters through the wringer. “It’s going to be uneasy for you, but keep writing.”

Also when it comes to characters, they sometimes take on a life of their own. At that point: “You are not God moving things around, you are the secretary following your characters around taking notes.”

To stay focused on story, she encouraged writers to think about how they can sum up their story in three lines—turning their plot summary into an elevator speech.

Of course, even the best-laid plot plans sometimes fall by the wayside once the story gets going. To illustrate that point, she quoted David Mamet: “You can plan all you want, but once the shouting starts, all bets are off.”
At the same time, discovering your story is not always easy. “Writing is very wasteful,” she said, describing how whole chapters (and sometimes several chapters )sometimes end up in the trash folder. “First drafts are really messy.”

Speaker Robert Bidinotto shared the marketing approaches that have helped him to become a successful self published author of thriller novels. Although focused on marketing, he also made the point that the most crucial factor in writing success is to write a good book. Part of what makes a good book comes from being true to one’s own voice.

“Identify things that set you apart,” he told eager listeners. “Carve out what’s distinctly about you.”

Known for his trademark hat, Bidinotto has branded himself as “The Vigilante Author.” It’s something that makes his books stand out—along with the great storytelling.

Bidinotto shared a tip sheet called “10 Most Important Ways to Market Your Ebook” that included invaluable advice. Those tips are all available at his website, http://www.bidinotto.com

Something refreshing about Bidinotto’s advice is that while he has become a marketing expert, in the end, he emphasizes the need to hone one’s craft: “Write the best book you can—preferably, more than one—and ideally, in a series.”

As a mystery and thriller author, Austin Camacho also had a lot to say about conflict during his session, “Conflict and Suspense.” He was quick to point out that conflict does not necessarily mean violence or action. Instead, human motivation is the cause of conflict.

He encouraged writers to ask themselves two questions as they write: Why is it so important? What is the characters’ motivation?

“You as a writer need to understand these goals,” he said.

He also pointed out that the hero has to consider all things from a moral level—unlike the villain, who can simply act as best suits his purposes.

What are the moral implications for the hero? And of course, conflict forces the hero to change—hopefully for the better.

Camacho also pointed to models that have helped him in his own writing. One of those models came in the form of the Tarzan books by Edgar Rice Burroughs that he read as a boy. Through a simple formula of switching the point of view at the end of a chapter—usually in the middle of harrowing action—Burroughs created suspense.

“I’m gonna tell ya—in a minute,” Camacho said of the technique that keeps readers turning pages to find out what happens next.

He also suggested watching the classic film Rocky as a way to learn about tension and conflict. He pointed out that there’s actually very little boxing in the film (when I watched it that night when I got home, I counted just 13 minutes in the ring). The film really isn’t about who wins the fight, but about a down-and-out guy getting a shot at fighting Apollo Creed.

And of course, where better to get your shot toward becoming a great writer than at a writers conference?

Here’s your chance. Next year will be the 20th anniversary of the BTO, which was first held at the Avalon Theater in Easton. Like this year’s conference, the 2017 event promises to sell out quickly. Keep an eye out on our website, or please consider becoming a member, so that you don’t miss out on the registration.

See you there, and save me a seat.

This entry was posted in Writers & Writing and tagged Bay to Ocean Writers Conference, Eastern Shore Writers. Bookmark the permalink.