Read The Revenant before you see the movie 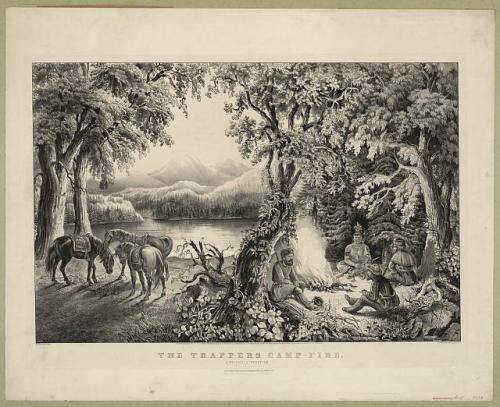 Trappers gather around a campfire. IMAGE COURTESY LIBRARY OF CONGRESS.

There’s something about The Revenant that sticks with you. This novel by Michael Punke is one that I read and then wrote a review of The Revenant for our local library blog months ago, and yet some of the images stay with me—such as Hugh Glass fighting a pack of wolves for a scrap of meat.
What’s interesting about this rather thin (in length) novel is that it harkens back to stories that were more popular in the 1950s and early 1960s. There used to be a notion that the frontier was something to be conquered and exploited, and this novel echoes that tradition. As a society we have come to the realization that this thinking is what brought us to decimating both the natural resources and the Native Americans of 19th century America.
However, Hugh Glass is more concerned about his own survival than self reflection. Facing an angry grizzly bear tends to give life a certain amount of focus, particularly in those seconds before the jaws come clamping down.
The novel is based on the real-life adventures of Hugh Glass, a genuine mountain man. Mauled by a bear during a trapping expedition in the early 1800s, he is left for dead by his companions. (This is where the title of The Revenant comes into play; the word is defined as a person who comes back from the dead.) 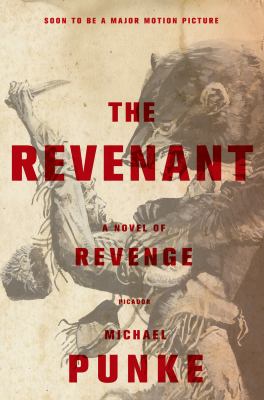 When he comes to, Glass must survive in the wilderness without his rifle or so much as a knife. There is no Motel 6 just down the road with its light on, but only savage beasts, cold, hunger, and Indians on whose land Glass is trespassing. More than simple survival, he is also motivated by revenge. (Interestingly, one of the mountain men he seeks to get even with is a very young Jim Bridger, who goes on to become one of the better-know frontiersmen today.)
Whole stretches of pages here rely on narration rather than dialogue because Glass is very much alone in the wilderness. In many ways, the story reminded me of the classic young adult novel, Hatchet, by Gary Paulsen. It is a novel about using our humanity to survive in a most inhuman wilderness.
The film based on the book comes out in general release in a few days, and by all accounts it is a gorefest. The beauty of the novel is that it has the grit without the gore. It will take you just a Sunday afternoon to read it, and you will thankfully settle back in your recliner, mug of coffee at the ready, and be glad that the trials of Hugh Glass were not your own. You will reflect on your own manliness for a few minutes, and then your thoughts will drift to the pizza takeout menu. Finally, as a realistic portrayal of the mountain men and the time in which they lived, The Revenant is a fascinating and worthwhile read.

This entry was posted in Writers & Writing and tagged The Revenant. Bookmark the permalink.