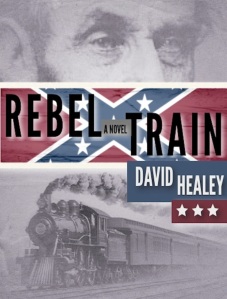 I’m always interested in the historical “what ifs” and wrote a novel a few years ago based around President Lincoln’s trip to Gettysburg in November 1863.

My novel REBEL TRAIN is about a group of Confederate raiders who hijack the train carrying President Lincoln to Gettysburg. There’s a bit of a twist at the end to make you wonder just who delivered those famous words.

The wonderful bestselling author Jack D. Hunter (THE BLUE MAX) had this to say about it: “Civil War buffs looking for something different will find ample reward in this complex, offbeat novel of deadly intrigue and hot pursuit.”

Of course, it was very exciting in July when REBEL TRAIN was featured as a question on the TV show JEOPARDY.

In writing the novel, one of the really fun parts for me was learning about steam locomotives. I even visited the B&O Railroad Museum in Baltimore to get a lesson in how to operate an 1870s-era locomotive. I have to say that being an engineer back then must have been part art, part science to coax the most speed out of a steam locomotive.

For me, REBEL TRAIN will always have special meaning because of the circumstances under which it was written. At the time, our daughter was just a baby, and I had took care of her during the day before heading off to work in the late afternoon. I would drop her off at mom’s office and then work at the newspaper until 11 p.m.

Most of the novel was written between midnight and 2 a.m. on legal pads, which I later revised as I typed them into my Powerbook laptop. Looking back at that experience, it was a bit crazy trying to write a novel under those time constraints. But when you’ve got that writing bug, you’ve just got to write.

I’ve always loved the story about how Lincoln wrote the Gettysburg Address on the train, on the back of an envelope. While that’s probably fiction, there’s no doubt that Lincoln’s words were inspired.