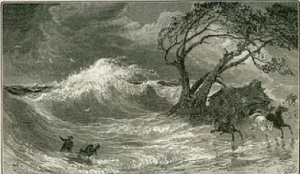 An old woodcut that depicts the storm of 1821 that struck the Delmarva coast.

In writing GREAT STORMS OF THE CHESAPEAKE I came across many accounts of old storms that have mostly been forgotten over time, but which were devastating to the people who lived through them.

One such storm struck the Atlantic coast of the Delmarva Peninsula in 1821, when the region was only sparsely populated. From descriptions of the time, the storm was almost certainly a hurricane. The storm devastated both Assateague and Chincoteague. Here is one contemporary account:

“In the early morning the terrified inhabitants, looking from their windows facing the ocean, saw an awful sight: the waters had receded toward the southward, and where the Atlantic had rolled the night before, miles of sandbars lay bare to the gloomy light, as the bottom of the Red Sea to the Israelites; then how a dull roar came near and nearer, and suddenly a solid mass of wind and rain and salt spray leaped upon the devoted island with a scream. Great pines bent for a moment, and then, groaning and shrieking, were torn from their centuried growth like wisps of straw and hurled one against another; houses were cut from their foundations and thrown headlong …”

The account goes on to note how one man and his grandson were swept six miles inland by the storm surge, but somehow managed to survive.

This entry was posted in Delmarva History, Great Storms of the Chesapeake. Bookmark the permalink.