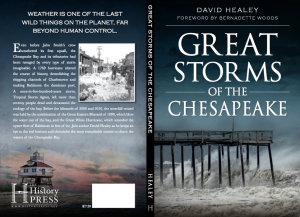 The weather forecasts were calling for the most snow we’d had in years here in Maryland. It was just possible that the “snow band” through the I-95 corridor ranging from just west of Baltimore up toward Philadelphia could see 2 feet of the white stuff.

Supermarkets were mobbed. Kids stayed up late because there wouldn’t be school the next day. Readers everywhere were loading up their Kindles or running to the library.

All the excitement about the snow seemed like a perfect opportunity to try something new—a live chat on Facebook.

The topic? The legendary blizzards, fogs, hurricanes and freezes we’ve had around the Chesapeake Bay region. This seemed liked a perfect tie-in with my book GREAT STORMS OF THE CHESAPEAKE, which features a foreword by Bernadette Woods. It also seemed like a fun way to spend an hour on the even of the big storm to share in some of the excitement about that.The idea came from having attended a live Facebook chat with Joyce Maynard, author of LABOR DAY, the novel on which the new movie starring Josh Brolin and Kate Winslett is based. Joyce was on the faculty when I was at Stonecoast, taking a 10-day seminar on creative nonfiction. She was a great teacher and I had read a chunk of her novel, so I headed over to her Facebook chat.

Granted the chat was sponsored by Book Girl Club, one of the really big pages for readers on Facebook, so there was a good turnout. Joyce Maynard very graciously answered questions about her novel and about her writing process, not to mention her pie-baking skills. (Baking pies features prominently in the novel and movie.)

So I decided to give that a try for my own Facebook page. The community there has slowly been growing, and I really enjoy keeping in touch with the many friends and readers who have joined in.

I promoted the chat on the page and Tweeted it a couple of times. I even tried to get the folks over at the Washington Post Weather Blog to mention the live chat because I’m a fan of their weather coverage, but no luck.

At the scheduled time I logged in and … just a couple of folks showed up. That was fine, because we had a good time and I enjoyed getting to know them better. The one aspect that was a bit tough to keep up with was constantly refreshing the page to see the newest comments. So all in all, I would call the Facebook live chat a success. It’s all part of the constant reinvention process for writers.

I’m already planning another one to coincide with the 70th Anniversary of D Day on June 6, 2014. On that day we’ll be talking about GHOST SNIPER: A WORLD WAR II THRILLER because it’s set at Normandy. Also, I’d like to share some of the stories I heard over the years from World War II veterans who were there … many of these were gathered during my years as a journalist.

So did we get some snow? About 10 inches fell! So should you as an author (or entrepreneur or musician or … ) give a Facebook chat a try? Definitely! Just be sure that you invite me!