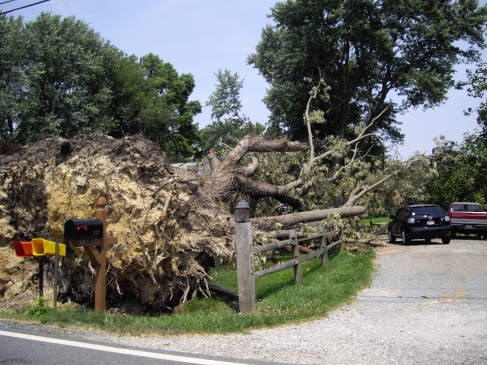 A massive tree that came down during the June 29, 2012 derecho weather event in Maryland.

From Chapter 17 of Great Storms of the Chesapeake

Derecho is a weather term one doesn’t hear much in the Chesapeake Bay region. But after the great wind storm of June 29, 2012, it’s a word no one will forget anytime soon.

According to weather experts, a derecho is a term coined in the 1880s to describe a peculiar weather phenomenon that produces a wall of wind and storm—some have described it as a hurricane over land.

While other areas of the country do experience a derecho-type storm at least once a year, it’s very rare in the Chesapeake region. The one that struck in 2012 actually originated in the midwest and charged all the way to the Atlantic in just about six hours. This was a vast, powerful storm that stretched across a front of about 240 miles. Experts say it was probably a long stretch of really hot weather that triggered this derecho.

Just before midnight, storm warnings were quickly posted online for the Maryland area of a storm with winds of up to 80 mph. This seemed incredible to local weather watchers, and there was a relatively short time to batten down the hatches before the storm arrived.

Many who were up that Friday night and watched the storm come in later expressed awe at the constant lightning, almost like strobe lights wielded by giants. Then came a wall of wind and heavy rain, threaded through by lightning. Some headed for their basements because the roar of the wind reminded them of a tornado. They were not far wrong.

The derecho produced powerful straight-line winds that approached tornado speed. Gusts of 60, 70, and 80 mph roared across Virginia, D.C., Baltimore, Chesapeake Bay and the Delmarva Peninsula. Winds measured 66 mph at the Chesapeake Bay Bridge Tunnel. A buoy in the upper Chesapeake Bay with a private weather station reportedly clocked a single wind gust of more than 100 across open water. It seems hard to fathom until one saw the wind damage. Trees came down everywhere, crushing cars, downing power lines and falling on houses. Millions in the mid-Atlantic region lost power and some had no electricity for days.

A handful of people died as a result of the derecho in the Chesapeake region when they were killed by falling trees. One man perished when his boat capsized in the bay at the height of the storm.

A radar view of the derecho hitting Maryland, courtesy of the National Storm Center.

In his weather blog for the Washington Post, meteorologist Jason Samenow wrote, “This derecho event is likely to go down as not only one of the worst on record in Washington, D.C. but also along its entire path stretching back to northern Indiana.”

In the wake of the derecho, it was generally agreed that this storm caused more damage than a hurricane—usually the most-feared storm in the Chesapeake region. In the annals of the Chesapeake’s Great Storms, it was the most recent entry in a list going back four centuries.