Antietam program to look at impact on Marylanders

No Civil War battles were fought in Cecil County, Maryland, but that doesn’t mean the war didn’t touch the homefront in other ways. Dispatches, letters and reports published in the Cecil Democrat and other newspapers kept local residents informed as they yearned for news about loved ones on the battlefield. There were times when the war raged nearby, and affected countians strongly.

One such event was the battle of Antietam in September 1862. It’s this battle, and its importance to Marylanders in particular, that will be the focus of the 7 p.m. Wednesday, Jan. 11 book discussion and program “Crossroads of Freedom” at the Elkton Central Library. In this book, author James McPherson examines not so much the battle as the politics and personalities surrounding it. The discussion will be led by local author David Healey.

The Confederacy was desperate for recognition by the British and French governments, and as the fortunes of war ebbed and flowed, the Union waged a political counterattack of its own in Europe and England. As McPherson emphasizes in the book, both sides sought a decisive military victory to support their claims in Europe.

Victory was elusive for the Union. At that time, George B. McClellan was commander of the Army of the Potomac. McClellan was the consummate organizer and administrator (his abilities if not his personality would be echoed later by another American general, Dwight Eisenhower). He had built a formidable fighting force. And yet he seemed reluctant to actually fight the enemy, claiming at every turn that he was ill-equipped or outnumbered. In his book, McPherson offers an interesting study of this complicated and talented individual in whom President Abraham Lincoln had to reluctantly put his trust.

Unfortunately for McClellan, it was Robert E. Lee who commanded the Confederate Army of Northern Virginia. Lee was a military engineer by training (he spent three years in Baltimore building a fort that was never used) and early in the war was given the nickname “Granny Lee” by some who saw him as a milquetoast. When chance and fate passed command of the South’s largest army to Lee, he would turn out to be one of history’s most daring and capable military commanders. 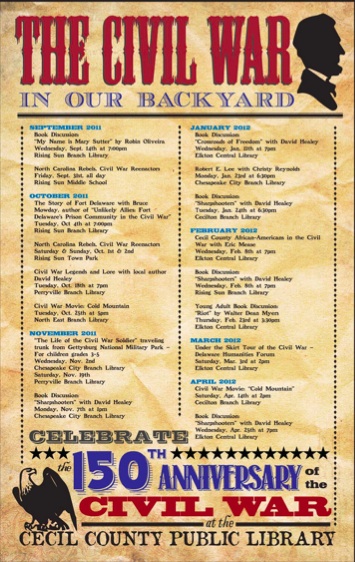 When Lee marched his forces into Maryland, and McClellan finally mobilized to meet the threat to the Union, the result was the huge battle at Sharpsburg. In a single day, roughly 25,000 Americans would be killed or wounded. Many Cecil Countians fought and died there, including the men of Snow’s Battery, an artillery unit made up of volunteers mainly from the Port Deposit area. At least one local father traveled to the battlefield and brought home his wounded teenage son.

Ultimately, it was the Union victory at Antietam that gave Abraham Lincoln the confidence and political capital to make his famous Emancipation Proclamation, freeing enslaved African-Americans in the states “in rebellion” … but not those in border states such as Maryland.

As we mark the 150th anniversary of this battle, this exploration of James McPherson’s book about the events leading up to Antietam—including events before and after the battle in Cecil County–should be a fascinating discussion for Civil War buffs. To register for the program and receive a copy of the book please call the library at 410-996-5600, ext. 481. (Reading the book is helpful, but not required).

This entry was posted in News and Events and tagged Antietam, Cecil County, Civil War. Bookmark the permalink.